Technical articles focused on the design, development, and commercialization of single-use regulated devices. 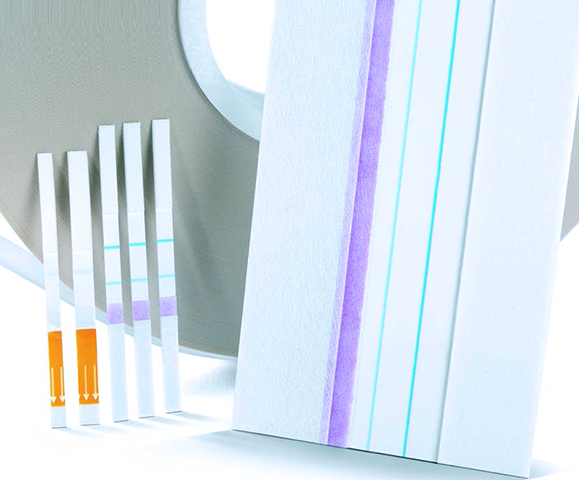 Lateral flow test strips are simple, easy to use devices that can detect the presence or absence of a target analyte (chemical or substance) in a specimen provided by a patient. These tests are typically used at point of care (medical office), at home, or in the laboratory. They are valued for being low-cost, simple, rapid and portable.

A typical lateral flow test strip consists of overlapping materials that are mounted on a stiff backing card for better handling and stability. In general, the layers include:

This pad is impregnated with buffer salts and surfactants to make the sample suitable for interaction with the detection system. It also functions to ensure that the analyte (if present in the sample) is capable of binding to the capture reagents of conjugates.

The liquid sample or specimen is introduced in drops onto the sample pad, where it migrates to the conjugate release pad.

The main role of this pad is to hold the detector particles and keep them functionally stable until the test is performed. Materials used to make the conjugate release pad include glass fiber, cellulose, and polyesters.

This pad contains antibodies which are specific to the target analyte. The antibodies are conjugated to colored of fluorescent particles (most commonly latex microspheres or colloidal gold nanospheres).

The original sample, together with the conjugated antibody bound to the target analyte, migrates further along the test strip into the detection zone.

This consists of a porous membrane, usually made of nitrocellulose or cellulose acetate, containing specific biological components (mostly antigens or antibodies) immobilized and arrayed in lines. Their function is to react with the analyte bound to the conjugated antibody.

If the analyte tested for is detected, the result is a response on the test line. This line is compared to the control line for proper reading and diagnosis.

The control line response indicates that the liquid has flowed through the test strip, ensuring that the test was done properly.

Also called a waste reservoir, is an absorbent pad designed to draw the sample across the reaction membranes by capillary action and collect it, preventing backflow. Wicking pads are most commonly made of cellulose fibers.

Most lateral flow test strips are intended to operate on a purely qualitative basis, giving either a "positive" or "negative" result. Some of these include:

Lateral flow test strips are interpreted either manually or with a machine or meter. These tests are usually used for initial screening, which can be confirmed later by a fully quantitative method.

The choice to use these devices is often evaluated according to parameters such as efficiency, sensitivity, and specificity.

While the principle of this test method has remained unchanged for decades, the continuous improvements of techniques have led to increased sensitivity and reproducibility, plus the simultaneous detection of several analytes. Also very importantly, the tests can be efficiently performed outside the laboratory setting, providing better access to medical diagnosis and care for developing countries. Recent advances and future goals and guidance for improving lateral flow test strips and assays are focused on: identifying new signal amplification strategies, nanoparticle labels and quantification systems, and improving simultaneous detection.

Interested in more? Take a look at these articles below:

Subscribe to notifications about new posts to the Boyd Technologies Knowledge Center.